JKH blog, the stories behind the collections and about slovenian heritage

The king of cold days. Veles is the horned god of the underworld, guardian of souls, god of magic, wisdom, protector of craftsmen, artists and a god of wealth. Veles brings wisdom, but punishes with disease. He can take the form of a dragon, a snake, a bull or a wolf.

According to ancient beliefs, our cosmos consists of a world tree, where the crown represents the sky, and the roots represent the underworld, which is ruled by Veles.

In spring and winter we meet Veles, as the master of wolves. We also see him as an old man leading »Divja Jaga« or »Pehtra Baba«. During the »wolf nights« (the period from Christmas to January 6) there is darkness, the new sun »Svarožič« is still fragile, this aroused fear and uncertainty in people, they defended themselves from evil spirits with the help of beliefs in various creatures, such as »Pehtra Baba« – the mistress of the forest. The mysterious time around the winter bonfire, which is also called »wolf nights«. The main themes of the celebrations during this time were the peoples struggle with darkness and cold, worship of life, protection from evil forces and creatures that visit the earth during these nights. During this time, the greatest power was held by the god Veles – who led the pack as the master of the wolves.

The 5th of January when the wolf nights end is Pehtra’s evening or the day of the innocent children. She is a mysterious mythical creature that is said to lead an impenetrable multitude of children’s souls over the sky during the Wolf Nights. She was also known as »The Gold Woman«, Queen of the White Women (Žalik Women). On this night, Pehtra Baba used to visit and give gifts to the children. At midnight she stepped on the threshold of the house with one foot out of the house and the other inside. She spun a miraculous thread that was worn around the waist by pregnant women, and was also hung on barns to protect animals, and was given to travelers for protection. Legend has it that if on that day chickens wold come to the house, it will be a lucky year.

The image on the shirt is my interpretation of the month of »Prosinec« – the old word for January and everything that happened in this cold month. Pehtra Baba, under the control of Veles, ennobled with his attributes and symbols, enters the house through a threshold full of chickens, followed by wolves. 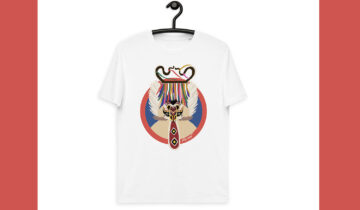 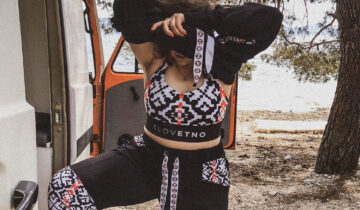 No products in the cart.

This website uses cookies to improve your experience while you navigate through the website. Out of these cookies, the cookies that are categorized as necessary are stored on your browser as they are essential for the working of basic functionalities of the website. We also use third-party cookies that help us analyze and understand how you use this website. These cookies will be stored in your browser only with your consent. You also have the option to opt-out of these cookies. But opting out of some of these cookies may have an effect on your browsing experience.
Necessary Always Enabled
Necessary cookies are essential for the website to function properly. This category only includes cookies that ensures basic functionalities and security features of the website. These cookies do not store any personal information.
Non-necessary
Any cookies that may not be particularly necessary for the website to function and is used specifically to collect user personal data via analytics, ads, other embedded contents are termed as non-necessary cookies. It is mandatory to procure user consent prior to running these cookies on your website.
SAVE & ACCEPT